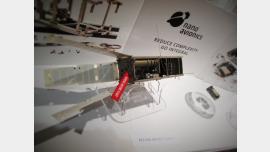 More than 62 years ago, Sputnik 1, the first artificial Earth satellite, zoomed across the sky. It was this device that spurred forward the famous Space Race, in which heavyweight Cold War rivals, the USSR and the United States,

jostled for the win. From then on, space seemed to be only the big country playground.

However, look at the sky now. It is likely that the objects flying there will paint your heart with the three proud colours: since 2014, Lithuania has also set foot in space.The satellite of Kaunas University of Technology, LitSat-1, whirled off into the outer space leading the way. It was quickly joined by its star companion,  Vilnius University’s LituanicaSAT-1. Both nanosatellite broadcasted the first Lithuanian radio signals into space. The first one almost sang to its Alpha Centauri colleagues: ‘Lithuania loves freedom.’ The second one boldly delivered the words of President Dalia Grybauskaitė: ‘Greetings to all Lithuanians all around the world.’So, what are these Lithuanian flyers?

Belonging to the small nanosatellite class, they can accomplish great tasks. Cheaper and more agile, these small objects do the work of an actual mobile laboratory and have the capacity to contain all the equipment needed for research.

All satellites behave like rascals when first launched into space: they start to throw cartwheels in all directions. However, a team of scientists and students from Kaunas University of Technology with Algimantas Valinevičius and Andrius Vilkauskas at the forefront have developed a piezo motor that facilitates the orientation of LitSat-1.

A special role in this motor is played by a simple pellet, which helps solve complex problems. Setting out LituanicaSAT-1 to the sky allowed Vilnius University researchers Vytenis Buzas and Laurynas Mačiulis to test Lithuanian-developed technologies, such as a mainframe computer, FM voice repeater, and solar cells.

Soon after, these space visionaries founded NanoAvionics, the first space technology company in Lithuania.  A few years later,the third Lithuanian satellite LituanicaSAT-2  developed by NanoAvionics was launched. The absolute majority of its systems were developed by employing the solutions created by local hands and minds. This object participated in the international project QB50, which used a large cluster of satellites to study the lower layers of the thermosphere.

Our previous satellites spent only a few months orbiting the Earth. However, LituanicaSat-2 that was sent to space in June 2017 still twinkles in the sky on a clear night. It is expected that this nanosatellite should survive another 10 years in space.

Its longevity is due to the rocket motor developed by NanoAvionics; it continuously raises and adjusts the satellite"s orbit. In the past, the idea that Lithuania would contribute to space technology seemed almost ridiculous. Well, who’s laughing now?  Perhaps the near future holds not only Lithuanian satellites but also Lithuanian astronauts? And who knows, perhaps one of them will be you!

Have you heard that Vilnius is the capital of physics this summer? The International Physics Olympiad is taking place on 17-25 of July.